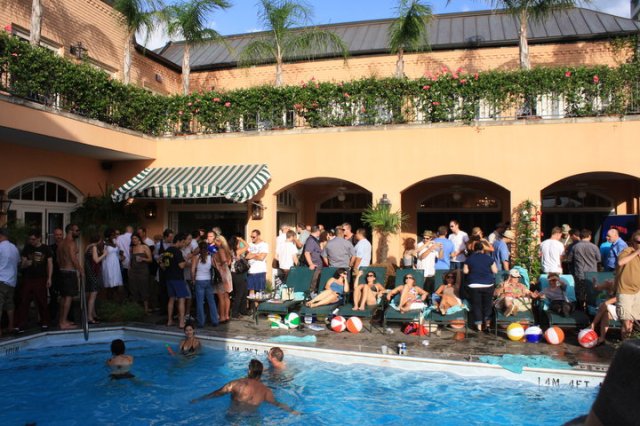 Finally, the Sazerac-tinged haze has cleared and I can somewhat recall what happened between the dates of July 21-25, 2010, for what was the 8th Annual (and my first) Tales of the Cocktail in New Orleans. And what tales I have returned with! Although, I’m afraid, dear readers, about half of those tales I will either keep to myself or have simply lost to the foggy grip of intoxication. I was warned not to overschedule myself, and now I know why–I didn’t go to anywhere near as many seminars and events as I had planned. I learned a few hard lessons (Drink more water!), and will certainly try to do better next year, but as my friend and hotel roommate Carmen Operetta Carroll said, “You’ll never be able to train for Tales.” All I can say is, expect the unexpected!

Here are my highlights (and yes, I had to look at my Foursquare history to remember a few things):

My first drink at Tales–caipirinhas at Casa Sagatiba, before I checked into my hotel! 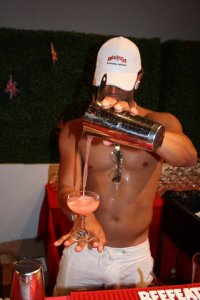 Trevor Schneider gets his flair on at the Beefeater Welcome Party. 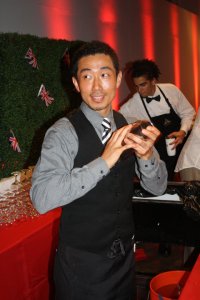 Yours truly and Tad Carducci, triple-fisted at the William Grant House Party.

Austin’s Lara Nixon at the “Summer in Paris” Spirited Lunch. 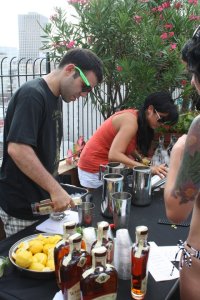 Nicole and Joe Desmond at the Classic & Vintage Pool Parlour. 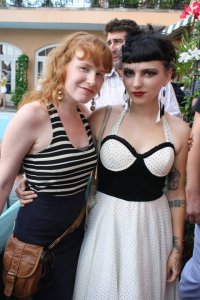 Debbie Rizzo and friends at the Classic & Vintage Pool Party. 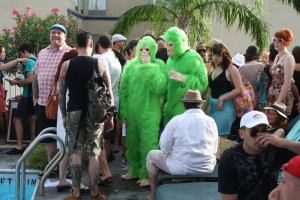 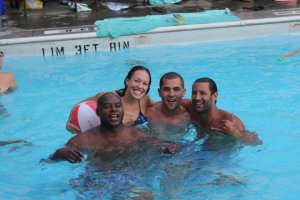 Dinner for six at Cochon, not to be missed. 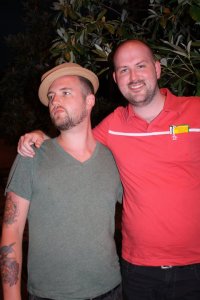 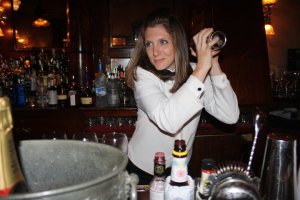 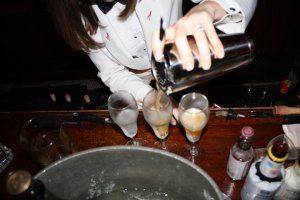 Straining those Cognac French 75s before adding the bubbly. 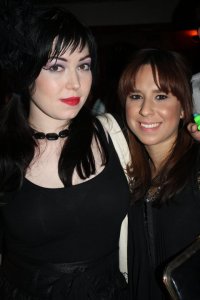 Tonia Guffey and Natalie Jacob at the Bar Room Brawl. 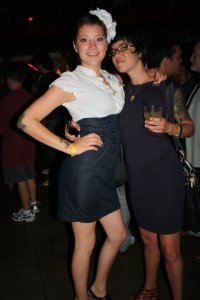 Morgan Young and Mia Consiglio at the Bar Room Brawl.

Joe Brooke and Gardner Dunn at the Bar Room Brawl. 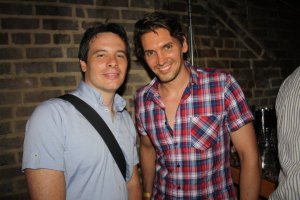 Sam Ross and friends at the Bar Room Brawl. 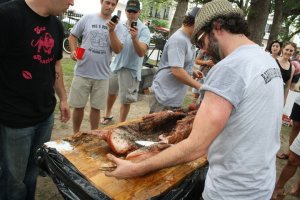 Carving a cochon from Cochon at the Pig ‘n’ Punch fundraiser in Washington Park. 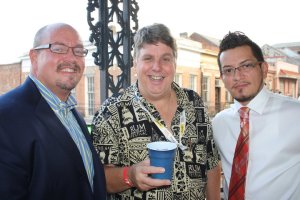 John Eason, Robert A. Burr and Esteban Ordonez at Don Q’s warm-up before the Spirited Awards. 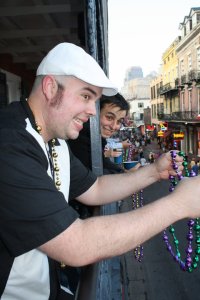 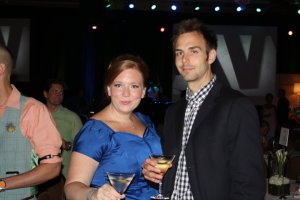 Yours truly and Emily Cavalier at the Spirited Awards.

For many more photos, be sure to check out The Dizzy Fizz on Facebook. Thanks to Ann Tuennerman and the Tales crew, to my friends old and new, and to the city of New Orleans for being so welcoming–I’ll be back!

“The heat’s no so bad if you stop on every corner for a Sazerac.”

This time next week, I’ll be packing up and shipping out for my virgin excursion to Tales of the Cocktail in New Orleans, the premiere liquor industry gathering for bartenders, brand reps, cocktail historians, writers and enthusiasts from across the country and around the world. Most of the events at Tales take place at the French Quarter’s Hotel Monteleone (which features a Carousel Bar), and from what I’ve heard, everyone ends up congregating by the pool. I’m hoping to avoid paralyzing hangovers so that I can keep up with a slew of seminars, tastings, and parties, and still be coherent enough to report all of the juicy recaps for you here.

Fortunately, veteran bloggers such as Camper English of Alcademics, Tiare Olsen of A Mountain of Crushed Ice, and Kaiser Penguin have posted a number of informative articles on how best to prepare for Tales and what to bring. Read Camper’s tips on what to expect and what to pack, Tiare’s lessons, and Kaiser Penguin’s 10 Rules to Follow at Tales. Is it your first time going to Tales too? In addition to Camper’s advice, here are some pointers from bartenders that I’ve spoken with, as well as my own packing essentials:

The infamous Ramos Gin Fizz at Tujague's in the French Quarter. Photo by David Grunfeld, The Times-Picayune.

Looking forward to arriving in New Orleans the night of the 21st! If we haven’t met yet, look me up and let’s toast a Ramos Gin Fizz! 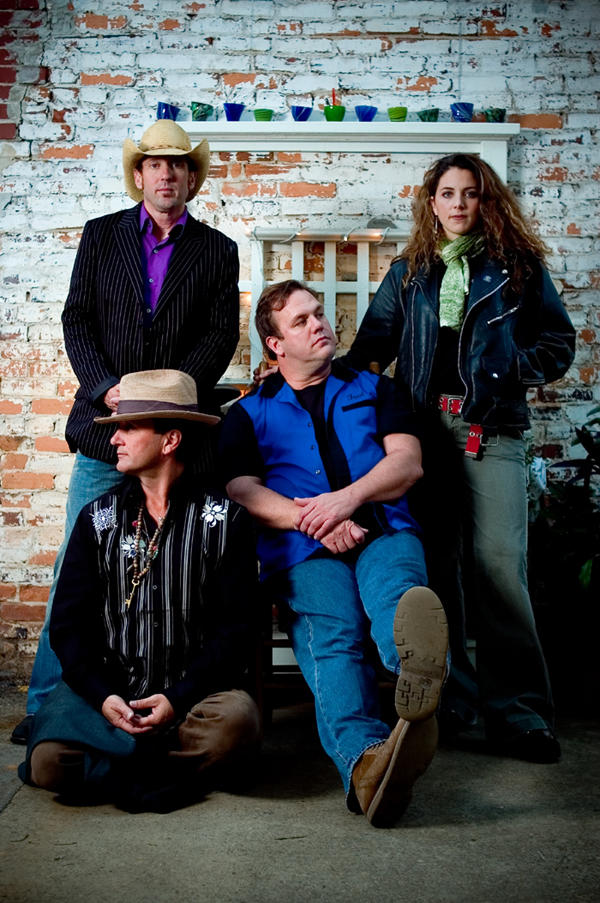 Coming to Tales of the Cocktail? New Orleans' own Cowboy Mouth is headlining the Louisiana Coastal Rehab Party hosted by Don Q Rum on July 22 at Tipitina's.

Bourbon, beer and rock–what’s not to love? Not a thing, am I right people?! Get ready for Idle Hands, a bar promising those three things, coming to the East Village next month. A labor of love from music-biz friends Rob Morton, Marc Schapiro and Dave Ciancio, the bourbon- and craft beer-focused bar will be on the basement level of 25 Avenue B while Billy Hurricane’s, a Mardi Gras-themed “speak-loudly,” will be opening up around the same time on the ground level. Billy Hurricane’s, owned by Roland Jabbour, Kyle Radzyminski and Billy Bishop (also owners of Point Break and Thunder Jackson’s), will feature Hurricanes, obviously, and other party favorites like wheels of shots, along with Cajun food and Top 40 music. With nearby New Orleans-themed bar Ninth Ward about to open as well, NYC seems to have a hankering for a taste of the Big Easy.

Downstairs, however, expect an atmosphere of understated cool complete with cozy booths and an ample selection of 50 to 70 bourbons, on par with Brooklyn’s Char No. 4 and Tribeca’s brown spirits haven, Brandy Library. Although Idle Hands won’t feature live music, there’s sure to be a meticulously-curated rock soundtrack and the bar may even host music industry parties. Rob says the bar is about 2-3 weeks out, so in the meantime, keep track of their progress here.

Get ready for the "Tastemaker's Punch" on May 17!

Are you ready for another event brought to you by The Dizzy Fizz? I’m pleased as punch to announce that tickets are now on sale for “Tastemaker’s Punch,” happening from 7 to 11 p.m. on Monday, May 17 as part of The Manhattan Cocktail Classic!

In New York City, art is everywhere you look – it’s even in your glass of punch! You are invited to celebrate the creativity of NYC cocktailians with a stylish soiree featuring punches made from artisan ingredients. Featuring special guest and toastmaster, Dave Wondrich, the puncheon will stimulate your senses while you take in contemporary artwork in a West Village penthouse gallery with terraces overlooking the Hudson River. Exhibiting artists will include saloon artist Jill DeGroff, graffiti artist/designer Claw Money, cocktailian/painter Charles Hardwick, cocktailian/painter Nicole Desmond, cocktailian/photographer Elba Giron, and lots more. Spring-inspired punches will be created by top NYC mixologists. And of course, it wouldn’t be a Dizzy party without a slammin’ soundtrack and plenty of surprises. Come see what NYC’s tastemakers are up to!

Must be of legal drinking age. Includes complimentary admission to the Official Bar of the Manhattan Cocktail Classic (plus one drink ticket) on Monday.

The scene atop the penthouse terraces of Ramscale Gallery.

Can’t wait to get started on some seasonal party action? If you are in NYC, come out for drinks for two great causes on Sunday, April 25 at The Delancey. Co-hosted by Tales of the Cocktail and Nosalikes, “From NY With Love” will raise money for rebuilding efforts in Haiti and New Orleans. An open bar from 7 to 8 p.m. will feature the Sazerac, the official cocktail of New Orleans, along with Oloffson’s Punch, invented at the Grand Hotel Oloffson in Port-au-Prince and made with the famous Rhum Barbancourt of Haiti.

The suggested donation will be $5 per person during an open bar from 7 to 8 p.m., and $10 per person from 8 to 11 p.m. Drink specials will be in effect throughout the night. All proceeds will be split between the SOS Children’s Villages of Haiti and United Saints Recovery Project of New Orleans.

Can’t make it? We’ll still take your money! We will be setting up a Paypal account shortly, so stay tuned for that. 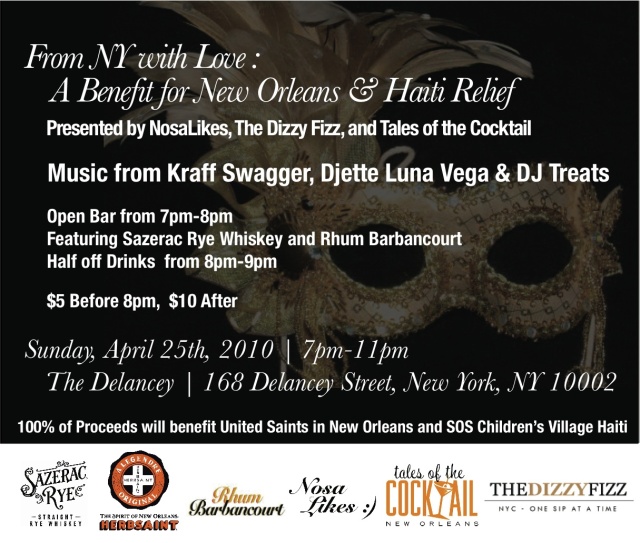 If you are looking for an expertly crafted cocktail in NYC this week, be warned that your drink might be hit-or-miss. Most of the best bartenders, mixologists, brand ambassadors, and cocktail historians across the city—and the country—are in New Orleans for the seventh annual Tales of the Cocktail, kicking off today. Of course, not everyone is there—but if you had the chance to go, you would be crazy not to. Tales (July 8-12), founded by Ann Tuennerman, is a rallying convention for those who find mixing libations to be their calling. It’s the boozy equivalent of  summer camp, with tons of seminars, tastings, Creole dinners paired with spirits, jazzy merrymaking, lounging at the Hotel Monteleone pool—in short, it’s a wet, wet dream. As you can imagine, I’m bummed not to be able to attend (hoping to go next year), but I have a few insiders on the scene who will attempt to report back to me, assuming they can recall what exactly went down besides a bunch of Sazeracs and Ramos Gin Fizzes. In the meantime, those of us not there can get a taste of what we’re missing by mixing up the official cocktail of Tales 2009: 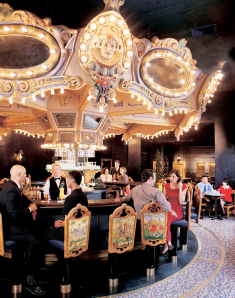 The bar is a rotating carousel, people. Does it get any better?

Everyone who’s anyone in the world of cocktails will be in New Orleans for Tales of the Cocktail July 8th-12th (um, except me, unless a recession fairy sprinkles some gold under my pillow). But wait! Coming to the rescue of one lucky mixologist (or amateur!) is the Hotel Monteleone, a historic hotel in the French Quarter. To mark the 60th anniversary of the hotel’s Carousel Bar, the hotel is holding a cocktail contest, and the deadline is fast approaching. The story is, from the time the bar opened in 1949 until the ’60s or ’70s, there was a drink on the menu called the Monteleone. Sadly, no one can remember or find the recipe, so herein lies your chance to come up with a concoction worthy to be the namesake. The recipes will be judged by VIPs who will be at the Carousel’s anniversary celebration on May 21. There are no requirements on types of liquor or style of drink, just make sure you email the recipe (along with your name, address, and phone number) to athornton@hotelmonteleone.com by May 18. The winning entry will become the new official Monteleone Cocktail, and the winner will receive four free nights at the Hotel Monteleone during Tales of the Cocktail 2009. I’ll have to see if I can come up with something exceptional. Best of luck to all!