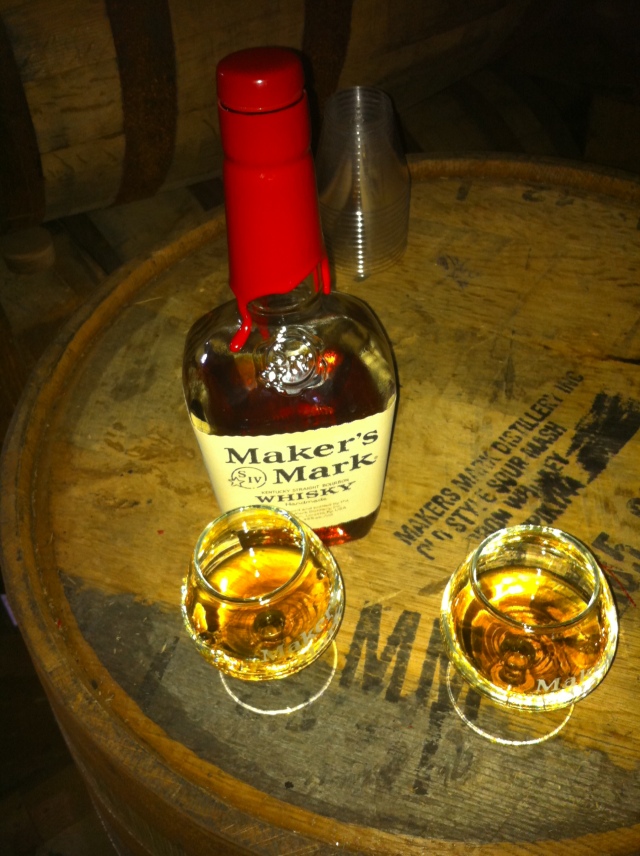 Sipping Maker's Mark at the source in Loretto, Ky.

Just as Bourbon Heritage Month came to a close last month, I was invited* to embark on a trip to Loretto, Ky, to visit the Maker’s Mark Distillery–my first-ever visit to a commercial distillery. On a 90-degree September day, I arrived at the Maker’s Mark campus — a sprawling collection of quaint black barn-like buildings with bright red trim — to see firsthand how the iconic red wax-capped Kentucky bourbon is made.

The first thing that struck me when I arrived–after an hourlong ride from the Louisville airport, which featured scenery of vast tobacco farms, Jesse James-era taverns, and one property with an endless collection of lawnmowers–was the sweet and sour aroma of fermenting grain. It’s fitting to compare the smell to baking bread, since the recipe for Maker’s Mark was reinvented in 1953 after Bill Samuels Sr. baked several loaves to experiment with various grain formulas. He settled on the use of winter wheat instead of the traditional, harsher rye, giving Maker’s Mark its signature soft finish.

At the boardroom, I was greeted by Victoria MacRae-Samuels, Director of Operations, and Dave Pudlo, Distillery Education Director.  I learned that the distillery has a long history, along with the Samuels family. Established in 1805 as a gristmill distillery, Maker’s Mark is the oldest working distillery on its original site, and a National Historic Landmark. A 10-acre spring-fed limestone lake provides pristine, iron-free water for the bourbon. Victoria told me how Bill Samuels Sr., a sixth-generation distiller, purchased the Loretto distillery the same year that he set fire to his 170-year old family recipe and created Maker’s Mark.

After a hearty lunch that included sliced ham with all the trimmings and Derby Pie (a chocolate and walnut tart doused in bourbon sauce) for dessert, Dave led me on an intensive tour of the distillery. I saw how the corn, malted barley and winter wheat are first inspected and then sent through and old-fashioned rollermill, and then the grain is cooked in a massive open cooker. Dave even let me taste the sweet yeast that goes into Maker’s Mark, which uses cultures left over from one batch to the next, meaning that some cultures can be traced back to Pre-Prohibition.

After fermenting in large wooden vats, the mash is double distilled–once in a 16-plate copper column still that reaches through several floors of the distillery, and again in a copper pot still before reaching 130 proof. The white dog is then placed in charred white oak barrels and stored in warehouses (called rack houses or rickhouses) for six to seven years, and the barrels are rotated from top down to ensure temperature variation. Finally, a panel of tasters (who wouldn’t want that job!) select barrels at different stages and balance them for the final bottling at 90 proof.

For more than 50 years, Maker’s Mark has proudly stuck to their one expression of bourbon, but in June of this year, the brand turned heads by releasing something for the next generation of whiskey drinkers–Maker’s 46. Developed by former Master Distiller Kevin Smith ( recently hired as Beam Global Spirits & Wine’s Director of Bourbon and Distillery Operations), the classic Maker’s Mark is aged an additional two months or so in barrels featuring seared French oak staves–not charred, but seared. This wood “recipe” was the 46th variation created by Brad Boswell of the Independent Stave Company, giving the new bottling its name. The result is a more toasted version of Maker’s Mark, featuring bolder spice yet still lots of vanillans and a soft, long finish. Best of all, the 94-proof Maker’s 46 is only about $10 more than the original Maker’s, retailing for about $35.

Maker’s Mark goes to great lengths to retain the level of craftsmanship that started their brand, and this was apparent throughout every step of my visit. It’s why the labels on the bottles feature Marjorie Samuels’ (wife of Bill Samuels Sr.) original lettering and each bottle is hand-dipped in wax. This year, Dave said Maker’s Mark hopes to produce 1 million cases, a company milestone. About 25,000 cases of Maker’s 46 are expected to be released this year.

I want to thank Victoria, Dave, and new Maker’s Mark Master Distiller Greg Davis for showing me such hospitality, and also to Evins Communications for arranging my visit.

If you have the opportunity to visit Maker’s Mark or any other stop on the Kentucky Bourbon Trail,  do it–you’ll experience an American tradition, and best of all, taste the results. 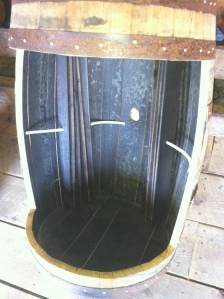 An open display of the Maker's 46 barrel featuring staves of seared French oak.

At Maker's Mark warehouses, barrels are rotated down six floors for six to eight years.

Shiny copper stills at the distillery.

*Maker’s Mark paid for my travel and accommodations. I was not compensated in any other way or expected to write a review.