A cocktail should be consumed quickly, “while it’s still laughing at you”–Harry Craddock, American bartender and author of “The Savoy Cocktail Book,” circa 1930.

Of all of the bustling corners in America where working men and women have enjoyed a stiff tipple since the early 19th Century, no metropolis has done more for the history of the cocktail than New York City [hey, David Wondrich said it, not me],  so it was fitting that this past weekend’s Manhattan Cocktail Classic preview went off without a hitch. There’s so much to digest (believe me, my liver is still working on it) from all of the seminars, tastings, and parties, that it’s hard to believe that this was just a two-day affair. Based on the success of the weekend, I can’t imagine how much of a knockout the grand event, taking place May 14-18, will be.

On day one, I arrived at Astor Center just in time to sit in on “Have Cocktail Shaker, Will Travel,” led by Charlotte Voisey of Hendrick’s Gin, Simon Ford of Plymouth Gin, and St. John Frizell of Redhook bar Fort Defiance. This seminar covered the enthralling period when New York mixologists took their craft overseas, both before, during, and after Prohibition. Before the 1920s, bartending was taken very seriously in the States, and mixologists had a much-respected, if not celebrity status that was well-received across the world. Charlotte spoke of London’s reverence for cocktails during the Prohibition era, and how American bartenders came over and loosened things up a bit, especially Harry Craddock who was head bartender at the American Bar at the Savoy Hotel during the 1920s and 1930s. Since Craddock is believed to have created the “White Lady,” that was our first cocktail of the seminar (gin, Cointreau, lemon juice). Simon followed with stories about “Professor” Jerry Thomas, considered the father of American mixology, who brought his showman style of bartending across the U.S. and Europe before settling back in New York in the 1860s. To commemorate Thomas, we drank the gin “Daisy” (gin, orgeat syrup, maraschino, lemon juice). Then St. John Frizell gave an enthusiastic account of the life of Charles H. Baker Jr., a traveling bon vivant famous for writing “The Gentleman’s Companion Vo. I & II”  in 1939.  St. John has done extensive research into Baker’s life and offered insight into how the writer used his inheritance money to travel the world on round-the-world cruises that were popular for featuring “flapper pirate”-themed parties. Baker, who hung out with the likes of Ernest Hemingway and William Faulkner, recorded better than anyone the exotic recipes of what people were drinking and eating during his time. We tried one such concoction, the “Barbados Buck” (rum, ginger beer, lime juice), which was a tropical number, indeed.

After a much-needed lunch with a few of the ladies of LUPEC NYC, I returned for another round of seminars, starting with Sasha Petraske’s “Cocktails for Your Home Cocktail Party.” Sasha’s primary message was that if you are going to throw a decent cocktail party, you must have decent ice. For proper cocktails, the storebought bag of ice or the ice cube trays that have absorbed the flavors of the contents of your freezer (God forbid, fishsticks) will simply not suffice. Sasha recommends cleaning out your freezer in advance, making an ice block using a plastic tray, cracking the ice before your shindig, and then refreezing it until used. Other factors to take into consideration are the amount of glassware you will need, your dishwashing capacity, and how much liquor to buy (expect to serve five drinks per guest, if you’re throwing a rager). Sasha explained one easy way to keep glasses chilled during a cocktail party–employ a 19th Century method of creating a grid of glasses on top of a bar table, filling the first row with ice water and the second row with ice. By the time you need the glasses in the second row, the ice will have melted into ice water, which you can then toss before filling with the cocktail. Other tips and tricks: have four to six cocktail shaker sets on hand (as well as citrus peelers, bar spoons, citrus knives, and julep strainers), keep juice as fresh as possible by squeezing small (no more than 12-oz.) batches at a time, and for goodness sakes, taste your drinks before you serve them to guests. As examples of drinks that could easily be served at a home cocktail party, we tried the “Bee’s Knees” (gin, honey syrup, lemon juice) and the “Silver Fizz” (gin, egg white, superfine sugar, soda water, lemon juice). It was great to hear Sasha admit that when Milk & Honey first opened, drinks were made so meticulously that some customers waited up to 20 minutes for their drinks, which he now regrets. “No drink in the world is worth waiting 20 minutes for,” he said.

I then caught the tail end of “The Many Faces of Cognac and Armagnac” with F. Paul Pacult, Charlotte Voisey, and Julie Reiner. Cognac and Armagnac, France’s legendary brandies, use virtually the same grape varieties but are made differently. Cognac’s wines are turned into spirit through double distillation in an old-style pot still, while Armagnac is distilled only once in an unusual still that is a hybrid of a pot and a column still. I arrived just in time to try Julie’s Cognac cocktail (Martell Cordon Bleu Cognac, Calvados Apple Brandy, sherry, Gran Marnier, orange bitters) and Charlotte’s Armagnac cocktail (Armagnac, apricot jam, orgeat syrup, Solerno blood orange liqueur, lemon juice, orange bitters), which were both delicious.

Downtime was spent at the event’s official bar at Astor, where more than a dozen different cocktails were served each day, mixed by ROGUE Events’ who’s-who of bartending in NYC and beyond. This was also a great place to meet friends old and new, and to try a few new spirits. Compass Box Brand Ambassador Robin Robinson offered me an exclusive taste of Spice Tree, which officially launches later this month. Controversial for its non-traditional Scotch-making process (formerly the use of French Oak inner staves), Spice Tree is now made using three different levels of toasting on the French Oak barrel heads, offering  layers of complexity. The long finish was rich, boldly spicy, and warming, which was perfect for the rainy day. I also enjoyed a taste of Skinos Mastiha Spirit, a clear malt spirit made from the aromatic sap collected from mastiha, or mastic, trees on the Greek island of Chios. Uniquely nectar-like without being cloyingly sweet, the Skinos has a shochu-like mouthfeel with a subtly floral finish.

As if that weren’t enough imbibing for the day, the evening’s festivities were not to be missed. The brand-spaking-new Crosby Street Hotel (79 Crosby St.) was host to the launch party for Gary “Gaz” Regan’s latest book, “The Bartender’s Gin Compendium.” Libations, sponsored by Plymouth Gin and Beefeater London Dry Gin, were mixed by Jamie Gordon, Chris Patino, and Dan Warner. I was stoked to have my copy of Gary’s book signed by the man himself, hobnob with spirits writers from Imbibe magazine and the Village Voice, as well as chat a bit with Dale de Groff, “King of Cocktails.”

Keep an eye out for my round-up of day two of the Cocktail Classic, coming soon. I offer a hat-tip and curtsy to Lesley Townsend and ROGUE Events for serving 18,000 people over the weekend and organizing such a memorable affair! 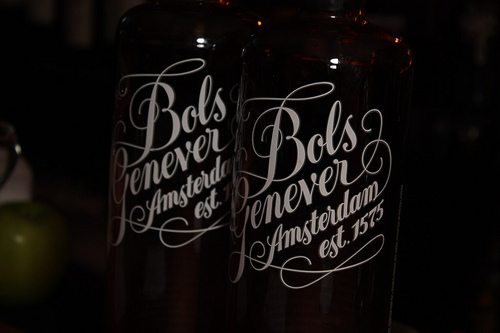 Earlier this week, Nirvino, a social networking site (and mobile application) that encourages users to recommend and review drinks, hosted a Bols Genever cocktail party at Beekman Bar & Books. Created in Holland during the 16th century, Genever is the original recipe for gin, although the white spirit tastes very different from the London Dry style of gin. Made with maltwine (distilled from corn, rye, and wheat), and various botanicals (including ginger, coriander, and, of course, juniper berries), Bols Genever has a rich, slightly floral, malty flavor and is very smooth and neutral. Relaunched last year, the spirit has been a hit with NYC mixologists and won the Best New Spirit award at this summer’s Tales of the Cocktail. It’s especially relevant to the classic cocktail revolution since Genever was one of four main ingredients called for in many cocktails created by the pioneer of American bartending, Jerry Thomas.

For the Nirvino event, Ben Scorah, mixologist and managing partner of Bar & Books, mixed cocktails that would normally feature scotch whisky and used the Bols Genever instead. Guests were encouraged to sample three different concoctions–a Green Apple-Infused Old Fashioned, a Dutch Blood & Sand, and a Holland Razorblade (Bols Genever, lemon juice, simple syrup, and cayenne pepper).  A laptop was connected to a large flatscreen TV that scrolled live reviews by Nirvino users of the cocktails, so everyone could see that the Blood & Sand was clearly the crowd favorite.  Tal Nadari and Katie Darling of Lucas Bols Spirits were on hand to share more information about Bols Genever, and at the end of the event, two Nirvino users were chosen at random to win bottles of Bols Genever and cocktail shakers. Tomas Delos Reyes, the NYC representative for Nirvino, says these cocktail events will be happening monthly, so if you want to join in, just sign up as a member at Nirvino.com.

Bols Genever is a crowd-pleaser.

Tomas Delos Reyes of Nirvino and Tal Nadari of Bols.