“When I sell liquor, it’s called bootlegging; when my patrons serve it on Lake Shore Drive, it’s called hospitality.”–Al Capone

On Sunday, August 1st, I nearly shed a tear as I witnessed a historic moment in NYC drinking culture–the first spirits distilled here since the days of Prohibition were served to the general public at two Brooklyn locations. Kings County Distillery, the little moonshine makers that could, poured their unaged corn whiskey–which also features malted Scottish barley for added complexity–at UVA Wines & Spirits in Williamsburg, while Breuckelen Distilling Co. flung open its Sunset Park doors to a thirsty crowd for tastings of its wheat-based gin and tours of its small factory centered around a 400-liter German copper still.

I visited both distilleries last month before they opened, and the yeast-scented anticipation hanging in the air was nothing short of infectious. Hard at work on a daily basis since spring, Brad Estabrooke of Breuckelen and Kings County’s Colin Spoelman and David Haskell–all in their early 30s–represent the new generation of distillers pioneering the artisanal spirits renaissance. Recent changes to state law have made microdistilling easier and more affordable. But unlike their rural New York counterparts, these guys face the unique challenges of their urban environs.

“I don’t think there’s any distillery in the country doing what we’re doing,” said Colin, who works by day as an architect before spending up to 8 hours a night at Kings County’s 325 square-foot warehouse in East Williamsburg. “Our stills are 8 gallons each. We’re essentially doing what a home distiller is doing, but times four. It offers certain taste advantages, certain integrity advantages.”

Colin, a Kentucky native, has been a moonshine hobbyist for years, while David, a magazine editor, had a bootlegging great-grandfather. Along with their three apprentices, they continuously monitor the cooking of organic New York corn and malted Scottish barley into their fermented mash before sending it through their small pot stills.

Due to the limited size of the operation, David and Colin bottle their moonshine in 200ml flasks selling for $20. Kings County is also placing its white dog in 5-gallon oak barrels, to eventually be bottled as bourbon. And they recently purchased another space within their building on Meadow Street that will be turned into a tasting room.

With a production output of about three times the size of Kings County’s, Breuckelen Distilling Co. at 77 19th St. is a dream come true for Brad, who came up with the idea to start a distillery with his girlfriend, Liz O’Connell.

“We were sitting around having drinks one day, discussing how we don’t like our jobs,” said Brad, a former bond trader who grew up in Maine. “We thought it would be rewarding to produce something. Then I was reading an in-flight magazine article that mentioned that the federal rules for distilling had changed, and that there was a revolution in micro-distilling. I immediately knew that was what I wanted to do.”

At Breuckelen, organic New York wheat is milled and fermented before going into the 16-foot still with eight plates which can be adjusted to result in a stronger or lighter wheat flavor. Brad then returns the wheat spirit to the still with juniper berries, lemon peel, grapefruit peel, rosemary and ginger to produce his gin. The nutty wheat grounds the botanical notes of the gin, offering a unique product for $35 per 750ml bottle. Brad said he is considering bottling the wheat spirit on its own, and is already planning a winter edition of his gin.

“I think people who are interested in trying different spirits, not just the mass-marketed big brands, will want to try our gin,” said Brad.  “People who appreciate local and artisan crafted, not assembly line.  Anyone who wants to see where and how their spirits are made.”

Kings County’s moonshine can be purchased at UVA and Thirst Wine Merchants in Brooklyn and at Astor Wines & Spirits and Park Avenue Liquor Shop in Manhattan.

And click here for all of the locations to buy Breuckelen Gin in addition to their Sunset Park tasting room.

Corn sourced from upstate New York is the base of the moonshine. 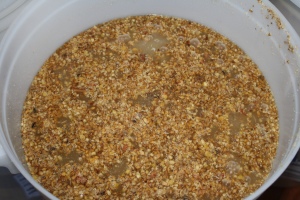 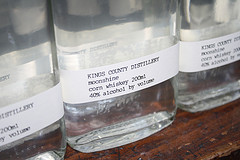 200ml flasks of moonshine feature labels made on a typewriter.

Brad Estabrooke leads a tour of his distillery. 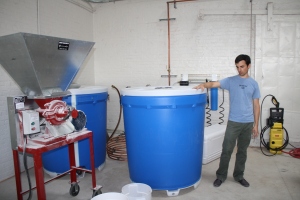 This is where the fermenting magic happens.