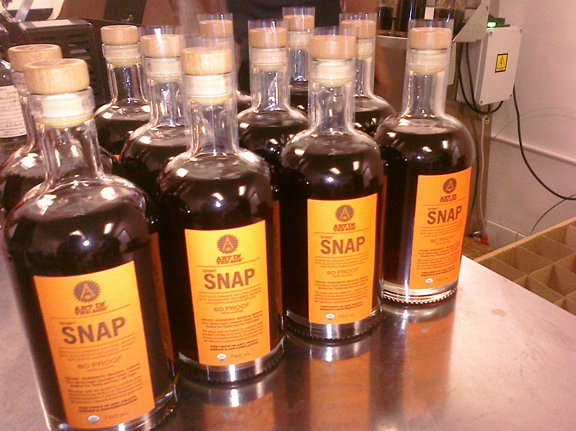 SNAP, coming later this summer to Pennsylvania, and eventually, to a bar near you.

You probably won't be seeing Albert Trummer's fireballs at Apotheke any time soon.

Bartenders from all over showed how they can-can mix St. Germain cocktails. Photo by Geoff Green.

So many parties, so little time! June officially kicked off summer party season in NYC, and so far it’s been quite the bender:

Beefeater Gin launched its limited-edition Beefeater Summer  featuring hibiscus, elderflower and black currant at the Ace Hotel. This gin has balanced sweetness and can be sipped straight–clearly Master Distiller Desmond Payne knows what he’s doing. Refreshing summer cocktails by Jamie Gordon, fish and chips, and a live twitter screen made this event a hit among the bartender, blogger and cocktailian crowd. 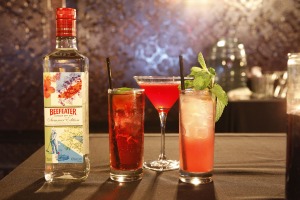 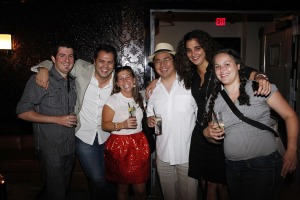 St. Germain’s Third Annual Can-Can Classic brought 13 bartenders from across the states to compete in a cocktail competition judged by Dave Wondrich, Andy Seymour, Lynnette Marrero, Toby Maloney and Phil Ward. The top $5,000 prize went to of Bobby McCoy of the Eastern Standard in Boston (winning cocktail recipe below). Afterwards, St. Germain kicked off its 1920s-themed Harvest Fair Party at the Bowery Hotel, complete with sword swallowers, carnival games and a live band. 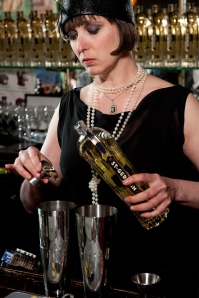 Zagat Survey hosted this week’s much-anticipated reveal of Theater, the new Tribeca cabaret-themed cavern from Apotheke’s Albert Trummer. Also billed as a celebration of Internet Week New York, Trummer opened the doors to his not-yet-officially-open space at 114 Franklin St. featuring a bar designed to look like a stage, a VIP room behind the stage, and an upstairs balcony and DJ booth. Zacapa rum cocktails and Sigmund Pretzelshop pretzels kept this party going strong. 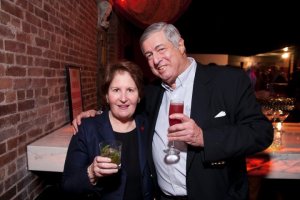 The Zagats toast the opening of Theater. Photo courtesy of Zagat.

At Theater, a cavernous space leads to a bar designed to look like a vintage stage. Photo courtesy of Zagat.

And just last night, hordes of Brooklynites packed into the PowerHouse Arena in DUMBO to celebrate the launch of Absolut Brooklyn, featuring a red apple and ginger flavor (although more like a hint of ginger). With special guest Spike Lee, DJ Spinna keeping the crowd bumping, professional dancers and a steady supply of refreshing cocktails, this party was off the heeze and further proof that Absolut throws some of the best parties in NYC! For more pics, check out Ucwhateyec.com. 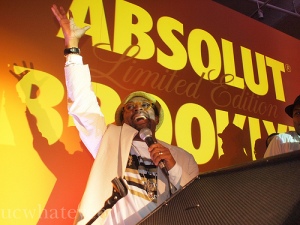 Whew! Off to drink more water and take a nap… until the next!

Combine all ingredients in a shaker tin over ice and shake.  Strain into a large coupe glass.  Garnish with a lemon twist. 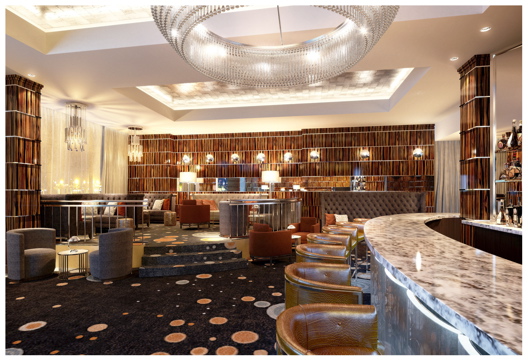 A rendering of the Empire Room, soon to class up Midtown's bar scene.

The snow’s a-meltin’ and the birds are a-flutter–could it be that spring is about to, you know, spring? Considering all of the hot new cocktail bars looking to open in the next month or two, I’d say NYC is going to have quite the warm awakening: 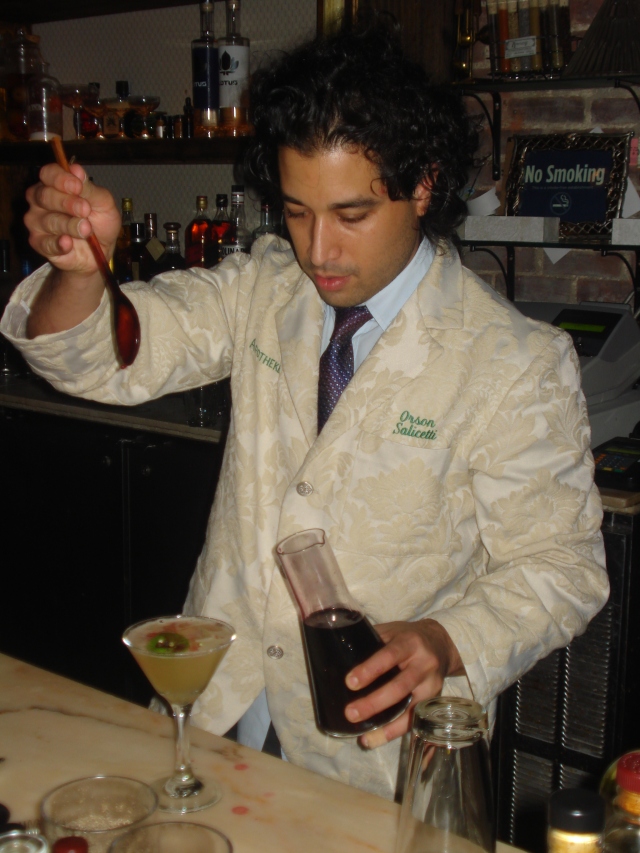 “If the divine creator has taken pains to give us delicious and exquisite things to eat, the least we can do is prepare them well and serve them with ceremony.”–Fernand Point, a French restaurateur considered the father of modern French cuisine

If you haven’t yet wandered down the narrow Chinatown street leading to the former opuim den-turned-Parisian-style apothecary bar Apotheke, you really are missing out on one of New York’s most hidden treasures. If you are lucky, you’ll open the ornate doors to see 2009 Star Chefs Rising Stars-winning mixologist Orson Salicetti behind the bar in his lab coat, mixing his exotic tinctures and infusions (made from ingredients such as dried fruits from Corsica) into dizzying treats.

Orson, who grew up in Caracas, Venezuela, developed his culinary approach to cocktail making thanks to the influence of his mother, a chef and restaurateur. He moved to NYC in 2001, and after a stint in Miami, he returned to New York to tend bar at Rayuela and Islero, where he met Albert Trummer. Albert, an Austrian bar chef/master mixologist, is the propietor of Apotheke, and Orson, as head bartender, is the backbone of the operation. Orson says he appreciates Albert’s innovative approach to mixing drinks and for giving him the freedom to source fresh, rare ingredients. Watching Orson mix drinks, and knowing that he made his modifiers by hand, it is clear that he takes an artistic, if not poetic, approach to the craft. For his Tomato Basil Martini recently served at the Star Chefs gala, Orson first rimmed the glass in a mix of Himalayan salt, fennel seeds, star anise, and sambuca–and that was just the garnish!

Q: What is the first thing you drink after you wake up?
A: A glass of water (I prefer sparkling water with a lemon) and an espresso.

Q: What is the first thing you drink after a hard day’s work?
A: My own Negroni (Plymouth Gin, Antica Formula Carpano, and Campari with my own bitters and an orange zest).

Q: What is the most delicious ingredient in your liquor cabinet?
A: For my liquors I have a special edition Santa Tereza Rum, I also have a Corsica dried fruit bitters I love, and sweet plum.

Q: If you could sit at the bar between any two people (alive or deceased), who would they be?
A: My dad and my grandfather.

Q: Three favorite NYC bars:
• The bar at DBGB Kitchen & Bar because of the great selection of artisinal beers
• The Rose Bar at the Gramercy Park Hotel for latenight and beautiful people
• Apotheke–great cocktails!

Q: Average night’s sleep:
A: I usually sleep around six hours, and a lucky night seven. During vacations, all day!

Q: What is your favorite place to shop for your bar?
A: Union Square Greenmarket, where they have the best selection of fresh botanicals, fruits, and vegetables.

Q: Where do you find inspiration?
A: First from my mentor, my mother, and second from the kitchen–aromas, flavors, and memories.

Q: If you woke up on a desert island, what bottle would you hope to have wash ashore?
A: Sparkling water with a fresh lemon inside.

Q: Do you have any bar-related good luck charms?
A: My Japanese jigger (it’s a very special present).

Q: Do you have a nickname for yourself when you’ve had too many?
A: Astano.