I was recently invited to visit the new Eataly Downtown, a stunning follow-up to Flatiron’s gastronomical ode to Italy. Located on the third floor of World Trade Center 4, the 40,000-square-foot emporium serves up everything you can imagine from freshly-shaved prosciutto to hand-pulled pasta and mozzarella, all while overlooking the 9/11 memorials. Rather than shy away from that emotional view, Eataly embraces the significance of its site with floor-to-ceiling windows throughout, and plans to highlight bread-makers from around the world as a way of bringing cultures together. All of this revitalization got me thinking about how attractive the nightlife scene is in the Financial District and TriBeCa at the moment.

From the team behind the Dead Rabbit (winners of the Best Bar in the World award, and also in FiDi, mind you) comes this rum-soaked ode to Prohibition-era Cuba at Pier A in Battery Park City. Enter a scene inspired by Americans’ sojourn from dry New York to hopping Havana via luxury seaplanes. Choose from nearly 50 reimagined classics such as highballs, punches, sours, Old Fashioneds, and cocktails, including four versions of daiquiries. Pier A Harbor House, 22 Battery Place, New York, NY. 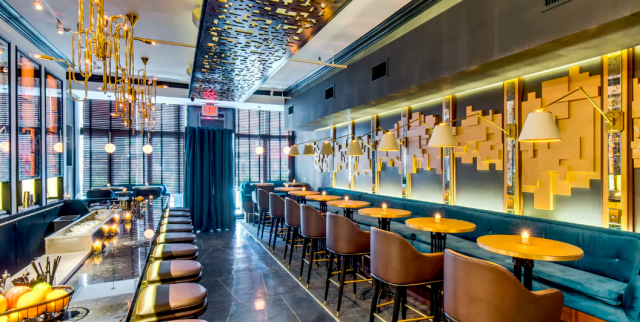 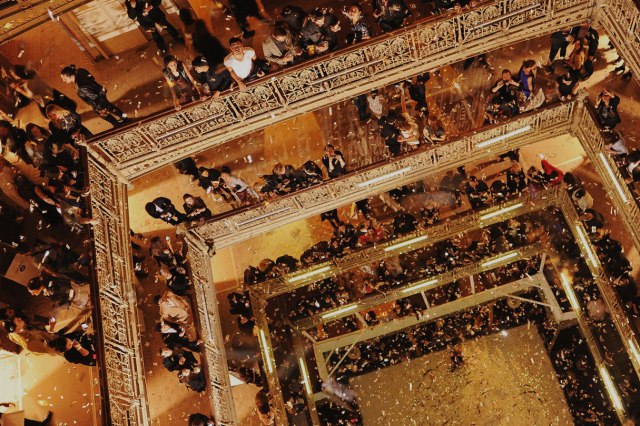 According to their Instagram account, The Beekman hotel is set to open in less than five days. The 1881 landmark building features a jaw-dropping nine-story atrium with a pyramidal glass skylight. Still not clear is when the hotly anticipated culinary offerings will open. Keith McNally will operate Augustine, a brasserie that we can only imagine will live up to his trademark, and Tom Colicchio will open American restaurant Fowler & Wells as well as The Bar Room, serving signature cocktails on the atrium level. 5 Beekman Street, New York, NY.

And great news! In celebration of the launch of NightOwl 3.0 we’ve teamed up with an incredible roster of bloggers and nightlife luminaries that you’ll want to know and follow; be sure to visit their sites: John Romard of The Boston Attitude, Dara Pollak of The Skinny Pig NYC, Jess Hagadorn of JessHagadorn.com and Young Winos of DC, Ryan Shea of Manhattan Digest, Terry Dagrosa of Seduction Meals, G-LO of It’s Just the Booze Dancing, Tara Fougner of Thirsty NYC, Jane Ko of A Taste of KoKo, Nicholas Feris of The Rum Collective, and Bella Magazine.

Just go to the entry link here. Each time you take an action listed– following a blogger, downloading the app, signing up for a newsletter – you’ll get additional entries, increasing your chances of winning.

Rules: You must be a US resident and 21 or older. Good luck! 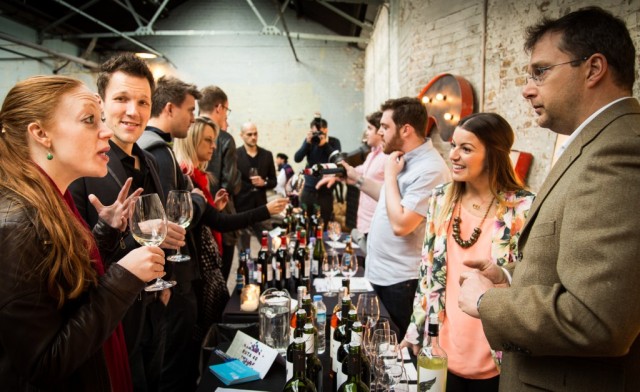 The Dizzy Fizz is proud to be a media partner for  Cambalache – One Night in Argentina, a cutting-edge celebration of Argentine wine and culture blasting some much-needed South American warmth to the Brooklyn Night Bazaar warehouse in Williamsburg on April 16 & 17.

This two-day event, coinciding with World Malbec Day on April 17, is not your typical wine tasting. Expect a multi-sensory experience showcasing the passion, complexity and contradictions that define Argentine culture. Guests can indulge in empanadas, Argentine beef, dulce de leche ice cream, wine-based cocktails, and of course, unlimited malbec and other wines from 26 of the top Argentine wineries.

In addition you’ll be invited to witness infamous Argentinian graffiti artists painting murals at an outdoor street party; venture into a rustic estancia to drink traditional ‘mate’ tea with authentic Argentinian cowboys; dance Nuevo Tango in a Buenos Aires nightclub; get a lesson in street slang to stir up trouble in downtown Buenos Aires; learn the unconventional art of pairing wines with music with a couple of English professors; and hear a bass-heavy global electronic music set by DJ Uproot Andy.

Tickets are available for $80, and for a limited time, Dizzy Fizz readers can use the code VINO to save $20 on pair of tickets, bringing the price to $140.

Included in your Cambalache ticket is the chance to win a set of two airline tickets to travel from New York-JFK to Buenos Aires on Aerolineas Argentinas plus three nights accommodation at the Pan Americano hotel. Winners will be announced each night at 9pm at the event and must be present to win. 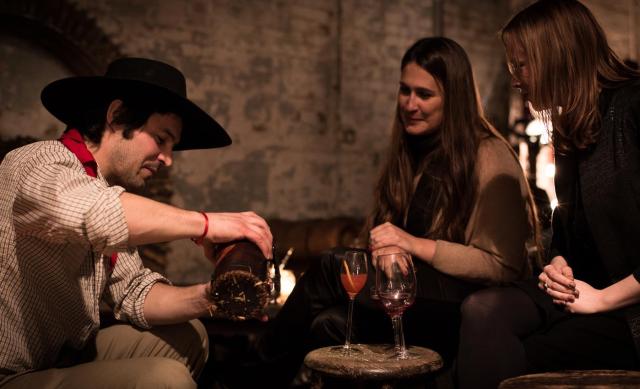 Calling all bon vivants! It’s time to storm the castle and celebrate independence with cocktails in hand at the French Spirits Soiree, coming Saturday, July 13 in celebration of Bastille Day weekend! Brought to you by NYC’s cocktail insider The Dizzy Fizz, this elegant walk-around tasting will tickle your fancies, heighten your senses, and inspire joie de vivre in a scene evoking a forbidden French garden. Want to save a cool $10 on tickets? Use the code EARLYBIRD before midnight on June 26!

All ticket holders must be 21+ with valid ID. Please visit spiritssoiree.com for more information.

“French spirits, wines and aperitifs have always been one of the main pillars upon which American bartenders have built their craft,” says cocktail historian David Wondrich. “Indeed, without them, we would have no Dry Martini, no Sazerac, no Sidecar, Brandy Milk Punch or French 75. Where’s the fun in that?”

Come one, come two, lovely cocktails are for you!

Single? Coupled? It’s complicated? Who cares! Everyone feels lovely with a romantic cocktail in hand. New Yorkers can celebrate the enchanting effects of the eternal icebreaker at Cocktails Are For Lovers, a red-hot walk-around-tasting party brought to you by yours truly from 7:30 – 9:30 p.m. on Thursday, February 7, 2013 at AstorCenter.

A limited number of general admission tickets are available for $45, while Urban Daddy Perks will provide a VIP experience.

Want a preview of what you’ll be tasting Thursday night?

The Islay Affair by Jonathan Pogash, the Cocktail Guru:

Visit cocktailsareforlovers.com for tickets and more information. Until then, lovelies!

Last week, Tanqueray Gin launched a new campaign at The Green Building in Brooklyn (the same location as last year’s Holiday Spirits Bazaar) featuring an impressive celebrity roster. “Tonight We Tanqueray” is all about making the most of the first drink of the night, and grabbing it “by the junipers,” so to speak. Featuring red carpet appearances by Idris Elba (Thor, The Wire), Michael Pitt (Boardwalk Empire), model/singer Karen Elson and singer Aloe Blacc, it was quite an exciting evening for Carroll Gardens.

The packed crowd sipped gin and tonics, French 75s, and frozen Negronis, among other cocktails mixed by bartenders from bars such as 1534, Death & Co. and Milk & Honey. Aloe Blacc performed a soulful set with a live band, debuting his single “Tonight Downtown,” written especially for the Tanqueray campaign. Check out a short film from the campaign and more information at tanqueray.com. 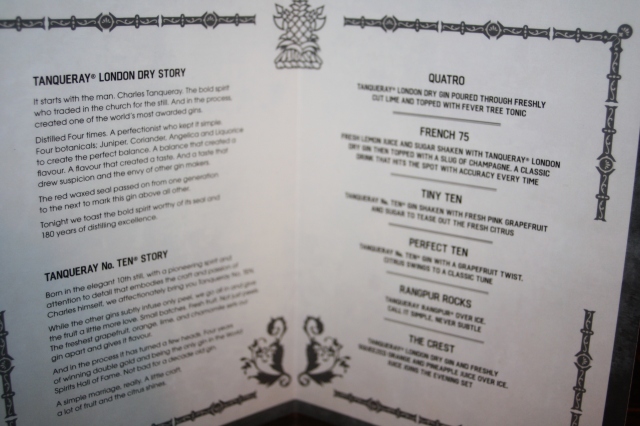 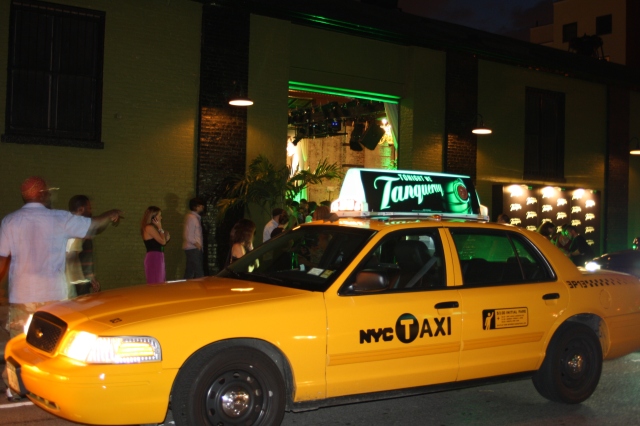 The New York Public Library gets kaleidoscopic for the 2011 Manhattan Cocktail Classic. Photo by Belathée Photography.

Kicking off with what has become the cocktail-lover’s prom of the year, the 2011 Manhattan Cocktail Classic, held May 13-17, drew a crowd of top bartenders and drinking enthusiasts from across the country and beyond. It’s great to see this event grow as it celebrates NYC’s place on the map for cocktail innovation.

And grow it has–founder and director Lesley Townsend said attendance for the five days nearly doubled over last year, reporting more than 5,000 attendees. She estimated that 75,000 cocktails were served throughout the festival, and all in real glassware. For the Gala, more than 3,000 cocktail fans lined up around the block for nearly an hour to get inside. Lesley said she is already working on ways to make the entry process more efficient for next year.

Although parts of the Gala had more of a nightclub feel this year–one writer compared it to Pacha–and food was once again hard to find, props must be given to Lesley and her team of 500 for organizing NYC’s quintessential cocktail bash. I particularly liked how every brand had equal presence at the event with a minimalist design as opposed to loud branding. Everywhere you turned, guests were smiling and seemingly having the times of their lives, sipping expertly-mixed cocktails.

Other events held throughout the festival included a Don Q Rums ’80s party, a one-time-only screening of the film “Last Call in New York” hosted by Tequila Don Julio,  the Indy Spirits Expo, and Campari’s Spirited Fête for the Senses at The Box featuring Padma Lakshmi. Seminars ranged from the spirit-focused to topics such as “How to Behave in a Bar.” Mostly, this festival was another example of how much fun the liquor industry can be–congrats Lesley on another successful edition of the MCC! 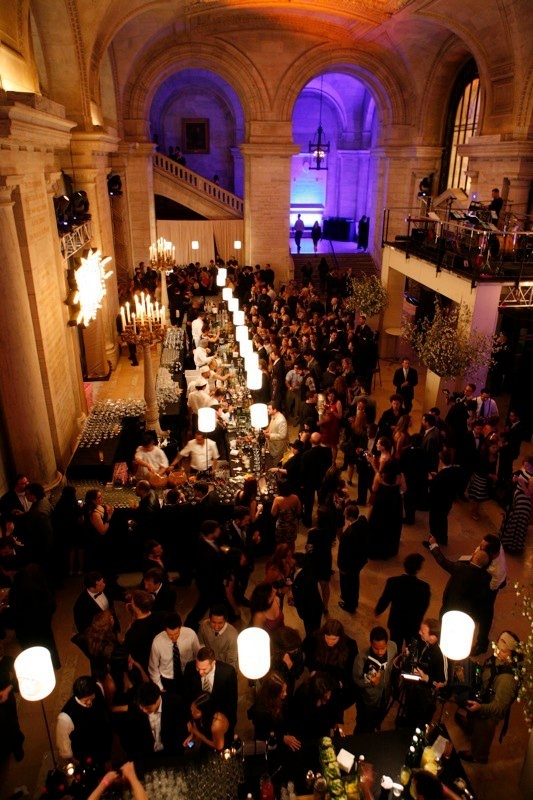 The scene at the Gala's main bar. Photo by Belathée Photography. 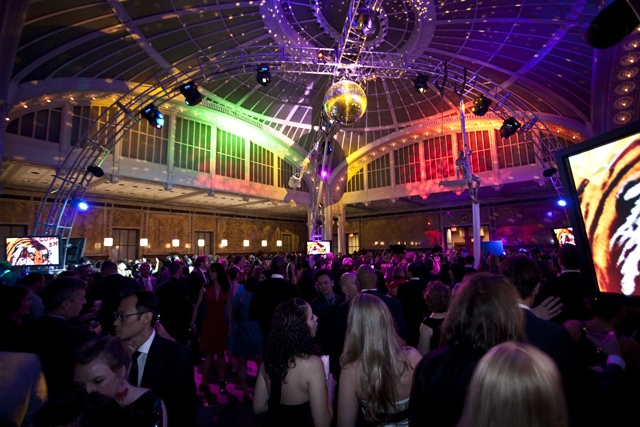 And in the basement, a more club-like vibe. Photo by Virginia Rollison.

Crushed ice, bourbon, sugar and mint - what could be better this time of year? 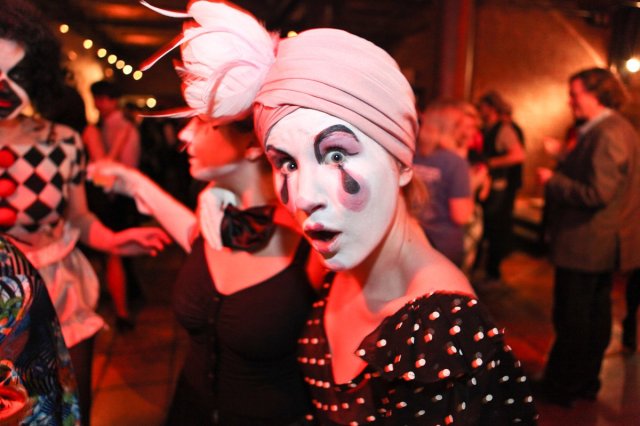 Oh mon dieu! The French Spirits Soiree went off without a hitch last week, gathering 300 guests to sample refreshing Belle Epoque-themed cocktails, punches and spirits. Astor Center was transformed to a springtime scene complete with live vintage jazz, whimsical clowns and a scandalous window-side burlesque performance! Check out the photo album by Gabi Porter on Metromix, photos by John Walder on Facebook.com/TheDizzyFizz, and recipes from the event at SpiritsSoiree.com. Some of the burlesque photos were just too hot to post, so yes–you had to be there!

And of course, none of this would be possible without the support of all of the sponsors: Lillet, Tariquet Armagnac, Pernod Absinthe, Ricard Pastis, Benedictine, Cointreau®, Rémy Martin 1738® , Noilly Prat, G’Vine Gin, June Liqueur, Bonal, Dolin, and St-Germain. Merci everyone! 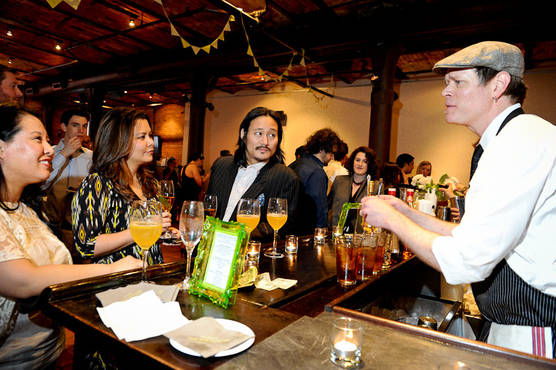 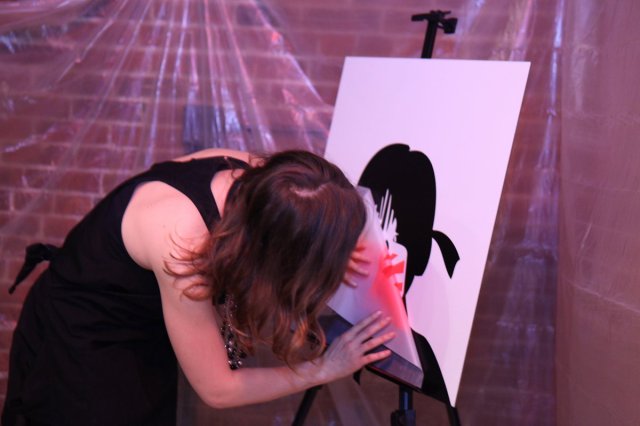 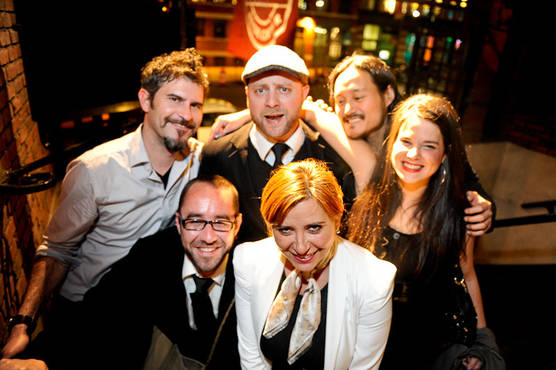 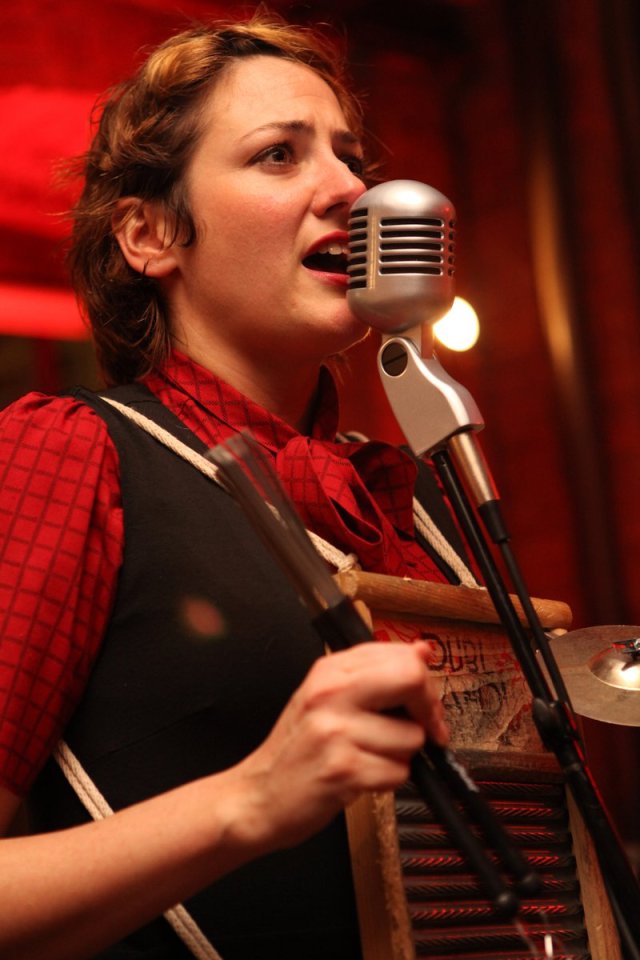 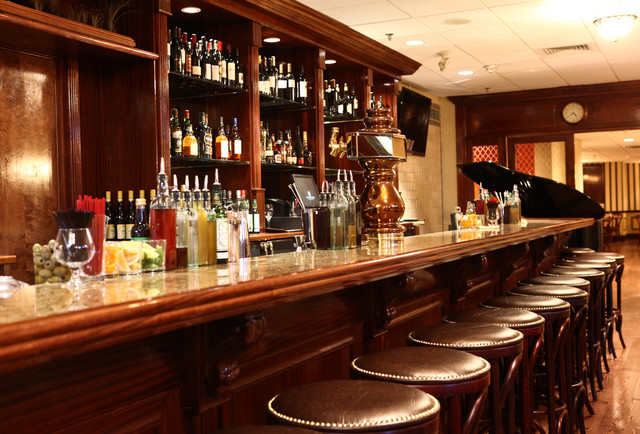 Michael Arenella's Dreamland Orchestra's Halloween Eve Masquerade is just one of many "libatious" events this Halloween.

Other than New Year’s Eve, Halloween is one of the most anticipated (and highly profitable, from the bar industry’s perspective) reasons to party here in NYC. Retail-wise, Americans are expected to spend $5.8 billion on Halloween, so we can only guess how much of that will translate into alcoholic beverage sales. Still hunting for Halloween plans that don’t involve staying home and handing out candy or staggering to dive bars with zombies? Check out these “spirited” events:

Join The Dizzy Fizz at The Summit Bar from midnight to 4 a.m. on Oct. 30 for $6 punch and some surprise treats.