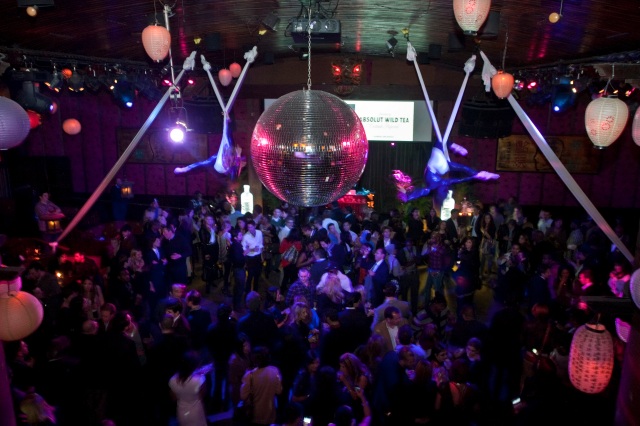 Absolut Wild Tea–Absolut flavored with elderflower and black tea. Hmm, where have we heard this one before? It’s been speculated that about a year and a half ago, it was originally released as the Absolut Boston limited-edition series, however, in addition to the tea and elderflower flavors, there are hints of red apple and citrus, making this an easily mixable spirit.

Despite the frigid cold this winter, not even 10-degree weather accompanied by blustering winds could prevent massive crowds from lining up for this eclectic event. It was also evident that everyone who gathered to access the event were all on the guest list, translating into an agonizing 40-minute wait to get in.

Once inside, the crowd warmed up with DJ Becka Diamond, a New York “It” girl, who spun current hits with 90’s favorites while a fire-swallowing dancer performed nearby. Aerial dancers hung from the ceiling, swaying and gyrating over the crowd. There were also Asian inspired appetizers, including sushi rolls, chicken satay, spicy tuna on cucumber slices, and miso eggplant that were carried by wait staff for the party goers.

The featured drinks for the evening were: Absolut Wild Tea Gimlet (AWT with fresh lime juice and simple syrup), Absolut Ginger Tea (AWT with ginger beer and a squeeze of lime) and Absolut Secret Citrus (AWT with lemon-lime soda with a squeeze of lime). Of the three, the Ginger Tea was the most impressive, but I did happen to notice a few drinkers preferring the vodka straight up.

It seemed no matter where you turned there was a face to be seen, including David Yontef, a millionaire from Season Four of Bravo’s The Millionaire Matchmaker.  Minus the crowds of people and frustrating door situation, this party seemed to have a little bit of everything, from wild entertainment, to delicious cocktails, to dance-able music and an extremely diverse crowd.

Absolut, you have come a long way into building your brand. Hats off to yet another successful flavor launch! 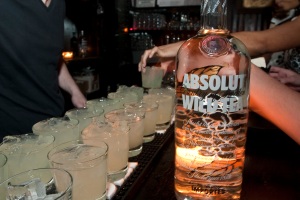 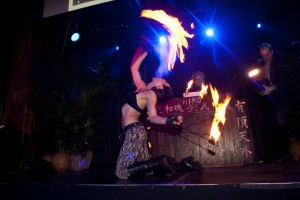