Nicholas Jarrett, seen here behind the stick at Dram, describes himself as "an itinerant full-time bartender and sometime miscreant" based out of Williamsburg, Brooklyn.

“Sleep? That bed is a coffin, and those are winding sheets. I do not sleep, I die.”–Captain Ahab, Moby Dick

Craft bartenders are often split into two camps: those who forge innovative methods in drink-making, such as molecular mixology, and those who consider themselves classicists, spending many hours tooling with historical recipes. Williamsburg’s Nicholas Jarrett is happily ensconced in the latter, and it comes as no surprise that he studied the classics, along with psychology and studio art, at Swarthmore College in Pennsylvania.

He left his studies to work behind various Philly bars, from corporate hotels  and independent restaurants to cocktail bars and illicit speakeasies, before breaking into the NYC cocktail scene. Philadelphia has enjoyed a burgeoning cocktail scene, spearheaded by the now-shuttered APO (originally Apothecary Lounge), of which Nick has been a key figure. Following stints at the Banker’s Club and La Bourse at the Hotel Sofitel, he was head bartender during APO’s  first year of operation, and until this past August, he was “resident curmudgeon and rabble-rouser” at the Franklin Mortgage & Investment Company in Rittenhouse Square.

Over the past two years, thanks solely to friends he first encountered by chance at the Old Absinthe House in New Orleans during Tales of the Cocktail in 2008, he has spent an increasing amount of time in NYC: first at Counter Organic in the East Village, followed by a tour of duty in the trenches at Pranna in Murray Hill. These days, he’s settled in behind the sticks at Flatiron Lounge in Manhattan, Clover Club in Cobble Hill and at Dram in Williamsburg. He can also be found covering the occasional shift at Bushwick Country Club.

He has studied under Gary Regan, is certified BAR-Ready thanks to the crew at Beverage Alcohol Resource, has done his time with the Wine and Spirits Education Trust, and has been thrown out of at least one bar in New Orleans each July for the past four years.

As much as he enjoys the classics, Nick doesn’t take himself too seriously. His ambition is to one day work in a dive bar–that he owns.

“The Dizzy Dozen” (The Same 12 Questions We Always Ask)

Q: What is the first thing you drink after you wake up?

A: Coffee. Strong and black. Iced in the summer, hot in the winter.

Q: What is the first thing you drink after a hard day’s work?

Q: What is the most delicious ingredient in your liquor cabinet?

Q: If you could sit at the bar between any two people (alive or deceased), who would they be?

A: I going to run fictional here and say Captain Ahab and Pierce Inverarity.

Q: What is your favorite place to shop for your bar?

A: Cocktail Kingdom. I respect the folks who take a more culinary bent and cruise the green markets, spice shops, or culinary tech tradeshows, and I enjoy tasting what they’re working on, but I like my cocktails lean, minimal, and classically rooted. Give me a good set of tools, quality ice, bitters, spirits, the basic fresh juices, and a couple of standard syrups, and I’m in my element. So Greg’s little shop is my sort of place exactly.

Q: Where do you find inspiration?

A: I look for inspiration in my ingredients and my methodology. Sometimes, something is begging to get used. So I put it to use. That use is determined by whatever methodology I’m refining at that point.

Q: If you woke up on a desert island, what bottle would you hope to have wash ashore?

A: Tough. It’s a desert island. I wouldn’t be unhappy if a nice bottle of sherry, calvados, or aquavit washed ashore. I also wouldn’t shed any tears if a couple of cases of Fernet Branca appeared.

Q: Do you have any bar-related good luck charms?

A: Funnily enough, although I’m a fairly superstitious person, no. I do bring my own tools to work, but that’s more of a familiarity, speed, and consistency issue.

Q: Do you have a nickname for yourself when you’ve had too many? 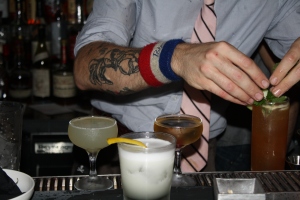 Nick prepares a bevy of classic cocktails at Dram.

One thought on “Bottlerocker of the Month: Nicholas Jarrett”