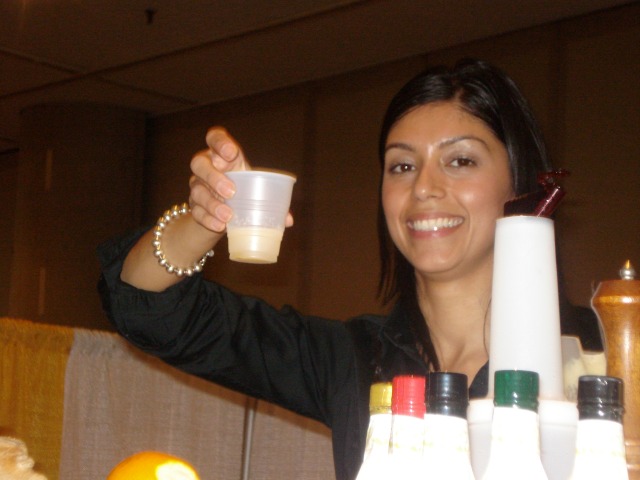 If you ever wanted proof of the clash between the crafty cocktail world and the superficial land of clubdom, it was at last week’s New York Bar Show, an annual food and beverage trade show. Nonetheless, buzzing through aisles of drink samples and girls in bikinis at Jacob Javits Convention Center certainly isn’t the worst way to spend an afternoon. I had hopes of bringing you some news of hot-off-the-presses, must-try spirits or fancy bar gadgets, but alas, I really didn’t learn anything new. What I did absorb (besides several sippy cups of tequila, gin, pisco, absinthe, beer, and vodka) is that the mixology side of the bar business has a long way to go to educate mainstream consumers that it’s worthy of as much attention as the pretty girls who pour your shots. Leading the cocktail teach-in at the Bar Show was the non-stop presentation by the New York chapter of the U.S. Bartender’s Guild. When I strolled by, I found mixologist (and talented photographer) Elba S. Giron mixing the Joie de Veev cocktail, of all things, while mixologists Jonathan Pogash and Jason Littrell handed out information and chatted with passersby. Other highlights included: Mekhong Spirit of Thailand cocktails, Pisco Sours with Gran Sierpe, and Daiquiris with Don Q Rum courtesy of James Menite of Porter House. Workshop sessions (which I didn’t attend) featured mixologists such as Gary Regan, Charlotte Voisey, Junior Merino, Tad Carducci, Brian Van Flandern, and Martin Miller’s brand ambassador Jon Santer. Entertainment came in the form of ice luges, beer pong, Hustlers Club girls, and an inflatable bull (which was just for display, I think). Whether or not this show was the right place to spread the good word of fresh-ingredient cocktails or not, props must be given to the USBGNY for putting in the effort. I would love to see more of a cocktail culture presence next year, or perhaps a separate event will emerge. Check out this video of Jason Littrell at the Bar Show making a Southside using Bols Genever.